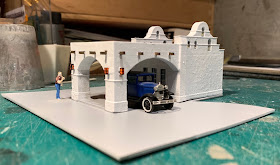 Robert’s Rule of Making Structures in a 3d Printer is simple: don’t make HO scale buildings with a 3d printer. Buildings aren’t particularly interesting for 3d printing; you don’t need multiple models, the models are too big for the printer, and the buildings usually have plain surfaces that are easier to make in other materials. The prohibition doesn’t hold for details - window or door castings can be used for other projects. Smaller parts that are hard to fabricate might be worth a quick 3d print. But don’t try printing a whole building.

Though even if it’s my rule… that doesn’t mean I won’t try. 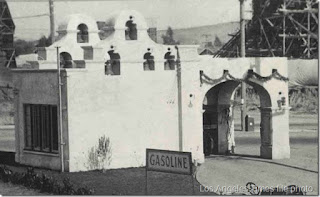 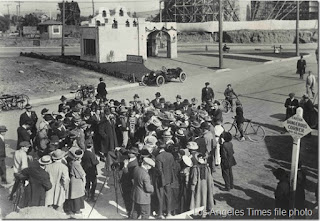 Years ago, I’d run across this photo of an early gas station in Los Angeles. It appeared in Larry Harnisch’s “Los Angeles Daily Mirror” history blog; he’d found the photo in a back issue of the Daily Mirror from 1915, showing the filming of a new movie at D.W. Griffith’s Fine Arts Studio. Griffith later filmed his silent masterpiece, Intolerance, and the sets for that movie are visible in the background of the original photo.

But between the crowd scene and the sets for the future movie, there’s this tiny little gas station. It’s the dawn of the auto revolution in Los Angeles, and cars need gasoline. This corner (Hollywood and Sunset) is on the edge of suburbia - the sets for Intolerance over there are being built in a former fig orchard. Photos of the studio behind the photographer show scattered buildings and empty lots. In a few years, this will be a very urban corner. Little gas stations like this would have been scrapped for the huge service stations that would appear in the 1920’s.

One sign of its age is the lack of any gas pumps visible in the photo; it's almost as if the pump machinery was hidden in the posts.

There's little sign of the gas station remaining. The site of this photo was almost certainly 4500 Sunset Boulevard, Hollywood, right where Sunset and Hollywood Blvd come together. The former movie studio is now a Von's supermarket, and the nearby Monogram Pictures is now a Church of Scientology video studio. The corner does have a small gas station, but the style doesn't match (art deco), plus it's triangular instead of square. I'm guessing our little gas station got torn down when a road was widened... or when newfangled gas pumps couldn't fit in the arch.

For a model railroad, and a model railroad set in the 1930’s, it’s a neat bit of architecture. The building itself is remarkably simple - a fifteen foot square office and similarly sized roofed porch covering the fueling area. There’s a lot of ‘teens era gas stations that appeared to be simple boxes to protect the attendant when he wasn’t checking your oil or putting air in your tires. (What a crazy time!) As a modest gas station, it’s also appropriate for the area down by the railroad tracks - this isn’t a high rent building.

However, unlike those dusty country corner gas stations, the Hollywood gas station dresses itself up by stealing details from every flavor of Spanish Revival it can. The most obvious feature are the silhouetted bell gables on each side, traditionally from Romanesque architecture. The fueling area has looks like the arched porte cocheres seen in any of the stucco spanish revival bungalows getting built out in Westwood. The wooden beams sticking out are vigas, straight from New Mexico and Pueblo Revival architecture. Floor to ceiling windows light the office; I’m guessing there are similar french doors on the front side to enter the office.

Construction Like all my 3d printed models, I designed this in SketchUp. The model is one piece - walls, bell towers, and port-cochere. I omitted the roof - it’s easy enough to do with sheet styrene or cardboard. The viga beams are styrene, set into sockets in the walls. The posts are hollow to limit the amount of resin needed.

Beyond the issues of architecture, this was an interesting model because it reminded me of the challenges of 3d printing and manufacturing. Getting this model printed involved a chain of challenges; as easy as 3d printing seems, there’s always snags trying to make more than one.

I’d initially sketched up this model after seeing Harnisch’s photo. I’d liked the model and thought it would be a good exercise to practice in SketchUp. That initial model messed up a few angles, making the model have some minor holes in it. When we try to print a 3d model, the slicing software needs to figure out which bits are the inside of the model (where the plastic or resin goes) and which parts are outside. A good 3d model is “watertight” - all the exterior faces touch, there’s no holes that will make the software confuse the inside and outside of the model, and there’s no extraneous faces to make the software question which counts as the exterior surface. Cleaning up the holes in an existing model is always a tedious process as you try to get rid of some incorrect angle or out-of-parallel plane without tearing apart the whole model.

It's a lot like real home improvement, except with more straight lines and flat planes than reality.

The next big challenge was how to print the model. By default, the Form One wants to print models on a support structure. You take your model, choose the face-up direction, and the Form One automatically chooses how to place supports (sprues) to support the first few layers as the surface is built. Support structures are important because it lets us build items that aren’t flat; it also lets us build hollow objects without pressure from the liquid resin pushing walls out. However, support structure require a lot of material - sometimes as much resin as the model, and the bottom of models isn’t always flat. 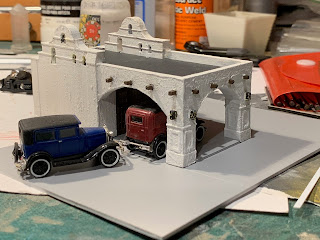 So I tried it - I printed one directly on the build platform, but fluid pressure (as the build platform peeled the part away from the tank then put it back against the tank) caused one side to blow out, and the window muntions to break. If I did things the way the manufacturer intended, and wasn't trying to cut corners to save resin and time, I'd have better results, but if I'm concerned about economics, I might try pushing the machine a bit harder than it really can take.

On a second attempt, I gave up and printed again on support structure. The windows again didn’t print perfectly, but I made new windows by drawing white lines on clear plastic using a technical drawing pen. 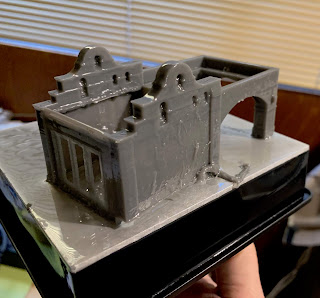 That final model was good enough for me, but if I wanted to sell the models, I’d need to do a lot more work on the process so the models were perfect coming out of the printer. Making these efficiently would also mean cutting the resin needed, and that means limiting the support structure. Finishing On the first model, I used my usual trick of white glue and gesso, stippled onto the model. It dries quickly and adds a lot of texture, but I found the surface much too rough to my eyes. I ended up coating the second model with an acrylic gel with pumice (from Golden Acrylics) which was much more subdued. In both cases, I had to be careful to only coat the stucco surfaces with the fake stucco.

Just like resin building kits, cast structures are great for assembly, but frustrating to paint. My first attempt at the lanterns left black paint everywhere. For the second try, I painted the lanterns orange, then used a very fine tip to color the metal parts black. Similarly, painting the bells, inset into the walls, definitely required a bit of care.

So now, I've got two very cute 1915-era gas stations that mix up way too many architectural styles. They don't quite have a place on the layout, and I don't really need two, but they'll be great reminders not to break "Robert’s Rule of Making Structures in a 3d Printer".