I'd shown the interlocking machine for the WP crossing a couple posts back. Now that I've shared it, it's given me a good kick-in-the-butt to actually install it on the layout. After a couple of weekend work sessions, I'm proud to say it's installed now. See the video above to see it in action, or read on and learn some of the details about installing it.

I've argued I need the interlocking because crews will otherwise forget the crossing is there. In case you doubt it, here's a photo from an early op session showing someone dropping cars directly across the crossing. 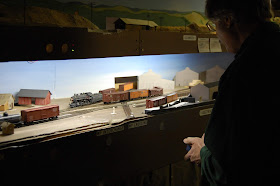 And finally, some details about the scene:

The West San Jose tower was a mechanical interlocking - that is, the levers on the interlocking machine moved piping which would cause switches, derails, and signals to change position and state. Seeing the Barriger photo of the crossing from the 1930's, I really wanted to model the control devices - the derails that would push cars off the tracks, and the movable rods that would move a derail out of the way so a train could pass.

I'd thought about doing something physical to block the tracks, but the alternatives I thought about, such adding a switch point in the track or dropping a derailing device on the rail, seemed both fragile and troublesome. I chose to do something less prototypical, embedding an LED between ties. The LED glows red if the derail is set, encouraging crews not to roll through. The lights don't force crews to deal with the interlocking, but they're at least an encouragement.

I'd also considered laying out the actual rodding to control the signals and derails. That idea also ended pretty quickly; I realized most solutions wouldn't be able to stand up to the aggressive track cleaning needed for a garage layout. I'd considered using something substantial such as piano wire for the rodding, but immediately had thoughts of poking a bit of rod straight through one finger. (Perhaps I could bend right angles at each end of a section of pipe so the ends are firmly in the roadbed?) For now, there will be no piping. 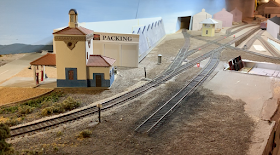 The real West San Jose crossing would have been protected by tall semaphore signals - one set of signals close to the crossing, and another about a mile back. Semaphore signals wouldn't survive last long at this point on the model railroad. The area around Auzerais Street requires a lot of reaching in to couple and uncouple cars, and the low upper deck means operators need to reach right in. Rather than watch semaphores get destroyed each session, I decided to use dwarf signals at the crossing. Like all modelers, I've usually got some interesting stuff in the scrap box for a project. The scrap box held some dwarf signal castings I'd probably bought at the Trains-Nothing-But-Trains closing sale back in 1983, but I only had two of those left. 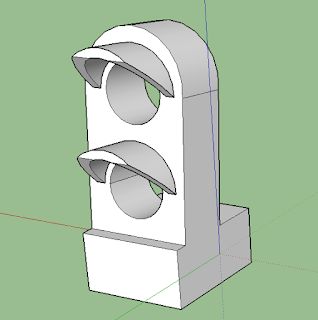 Instead, I fell back on my favorite crutch - the 3d printer. With about an hour of work, I'd sketched up a signal and had it printing on the 3d printer. I needed to refine the design widen the holes so they'd fit my chosen LEDs, but still had usable signals within a day of changing my plan. The design may seem a bit simple, but it's got all the same detail that my 1970's era white metal signal had... and I don't need to run to the hobby store to get more.

The interlocking machine controls a pair of track switches for the interchange track between the WP and SP. (Full disclosure: there was no such track here. When the SP and WP interchanged cars, they did so at a small yard along South Fourth Street. Switching interest won out over accurate trackage.) Like all switches on my layout, I use Tortoise switch machines to control them, both so crews don't need to reach into the scene to throw switches and so I've got electrical contacts to avoid dead frogs. The Tortoises work by reversing polarity, so the switches on the fascia are DPDT switches wired as reversing switches. That won't work with the Modratec contacts - it provides SPDT contacts for each lever.

Instead, I replaced the Tortoises with the the MP5 switch motors I'd used on the Market Street modular layout. The switch machines can be controlled via SPDT contacts. They're also easier to install - the position of the throw wire can be adjusted after the switch machine is screwed onto the layout. The MP5s do use tiny screws for mounting, but I've worked around this by mounting them to thin plywood with #2 screws at the workbench, then using larger screws to attach the plywood to the benchwork.

The area around the Western Pacific crossing hasn't gotten a lot of attention; apart from a coat of paint soon after the track was laid, there's been little work on the area for the last... oh, ten years. I did build a model of Western Pacific's tower years ago.

Putting in the interlocking also forced me to do a few other jobs - I added dirt to hide the bare homasote, glued down a fence leading to the Del Monte cannery. I also ended up improving the lighting. When I started on the Vasona Branch, I used under-the-counter fluorescent fixtures. They worked ok, but there wasn't always enough space for the twenty inch long fixtures. I also was always a little hesitant about threading 120 volt wire through the layout just in case the wrong wire got chafed or cut. When I'd checked out LED strip lighting years ago, I found the lights weren't really bright enough for layout lighting, and the printed circuit carriers weren't easy to mount. 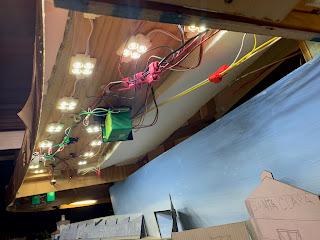 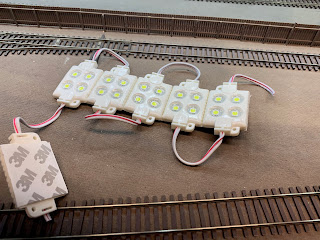 Last year, I'd spotted some cool LED units in Fry's electronics components aisle. These were 12 volt LED modules, with white LEDs on a plastic carrier. At $1.50 a unit, they were too pricey for an entire layout. Searching on eBay, however, I found the same modules were often used for hollow sign lighting, and that I could buy strips of a hundred of these lights for almost nothing. These are still available on Ebay (like this - search for "LED module 5050" (5050 is the part number for the bright white LEDs) and there's some that exactly match mine, and a lot of other similar fixtures. I like the waterproof ones; they've got sealed packages. I use 12 volt power supplies for laptops to power them - they're cheap ($10), come with a cord and plug, and don't cover up outlets like wall warts.

Next step: get some operators to actually test out the interlocking!